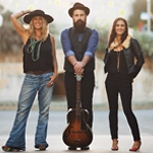 The group forged their way on the Australian live circuit for most the 1990s, releasing albums such as their self titled debut in 1996 and Shelter Me in 1998, selling them mostly at shows. The third album, 2000’s Sink or Swim, raised their profile and allowed the band to perform in Canada and the United States, attracting rave reviews in the process.

The biggest turning point came with the EP London Still (2002), which gave the band its first Australian hit. Followed in 2003 by the Lighthouse EP and the album Up All Night, which has gone double platinum in Australia and earned them four ARIA awards. That same year they toured Australia with Bob Dylan, who subsequently invited them to join him on his North American tour.Further hits, such as Bridal Train and Stay, have followed, along with live albums, more awards and ecstatic reviews for their live performances.