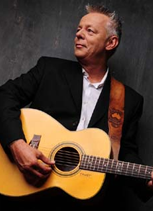 TCAN Annual Benefit 2021 continues a tradition of support for the positive impact the arts have on our community. Proceeds from the Annual Benefit support TCAN’s artistic programming as well as its community outreach initiatives. In December 2020, following a nine-month closure due to the pandemic, TCAN’s first virtual-only online fundraiser featuring Lori McKenna and Mark Erelli was the most successful fundraiser in our history.

This year, as we celebrate our 24th year as a community-based arts organization, TCAN Annual Benefit 2021 will feature one of the great guitarists of our generation: Tommy Emmanuel.

Tommy Emmanuel’s performance will be recorded live on TCAN’s stage in front of a limited capacity audience (120 seats) and aired on YouTube Saturday, December 11, 2021. Sponsors who help underwrite the expenses of this production will receive an exclusive invitation to attend the live performance and video recording at TCAN, enjoy a pre-concert soiree catered by Buttercup Restaurant of Natick, and meet the artist following the concert.

William Thomas Emmanuel is an Australian guitarist known for his complex fingerstyle technique, his joyous, exuberant performances, and the use of percussive effects on the guitar.

His recorded work includes over 35 solo albums, and literally thousands of guest appearances with artists as varied as Michael Jackson, Chet Atkins, Diana Ross, Bill Wyman, Marty Stuart, and Air Supply. Emmanuel’s awards include Australia’s Best Guitarist in Juke Magazine for 1986, 1987, and 1988. He received the 1988 Studio Musician of the Year award in Bi-Centennial Music Week. The recipient of numerous Rolling Stone awards such as Most Popular Guitarist in1989 and 1990, and Best Guitarist from 1991 through 1994, he also received Australian Adult Contemporary Record of the Year in 1991 and 1993. He was named Australian Performer of the Year by the MO Awards in 1995 and 1997 and also received a gold record for the sales of Classical Gas. Tommy Emmanuel received two Grammy Award nominations for Best Instrumental Performance, in 1998 and 2006.

As a sponsor of TCAN Benefit 2021, you receive an invitation to attend the live performance event, and more customized benefits and recognition. You and your guests will enjoy an evening of spectacular entertainment that includes preferred seating for the concert, an invitation for you and your guests to meet Tommy Emmanuel for a Champagne and Dessert After-Party following the performance.