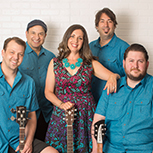 A teacher for ten years and a professional singer for twenty five, Peasley also combines her love of children and music into a lively act that engages kids and creates memorable and fun sing-along songs, offering performances throughout the greater Boston area. Peasley lives in the Boston area with her husband and three children, who provide constant inspiration!

Launching her music career as a member of the New York-based girl group “The Chiclettes,” Stacey developed a deep love and appreciation for the innocent, yet catchy songs of the girl-group era. She’s appeared live in concert at venues throughout the northeast. She is critically acclaimed for her debut CD Together as winner of the Creative Child Magazine 2012 Top CD of the Year Award and the 2011 Parents’ Choice Recommended Award. Her second popular album Lucky Day is acclaimed as one of the top 20 albums of 2014 by Musical Merry Go Round of KDHX radio St. Louis, awarded as the Creative Child Magazine 2014 Top CD of the Year and also received the 2014 Parents’ Choice Approved Award. Peasley is also the recipient of the 2010 Nickelodeon Parents Connect Parents’ Pick Award for Best Party Entertainer. Her music has been featured on radio programs nationwide, including Sirius XM’s Kids Place Live.