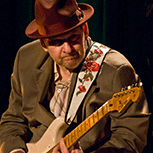 Legendary Blues guitarist Ronnie Earl is a four-time Blues Music Award winner as Guitar Player of the Year (1997, 1999, 2014, 2018) most recently receiving the award on May 10, 2018 in Memphis. He has served as an Associate Professor of Guitar at Berklee College of Music and has taught at the National Guitar summer workshop in Connecticut. Known for his clean clear tone Ronnie has been called more than once “The John Coltrane of the guitar.” (Jim Hynes, Elmore Magazine)