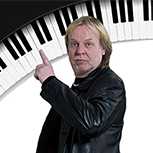 Keyboard wizard Rick Wakeman has two reasons to celebrate. First, his outstanding career in music has just been recognized by Queen Elizabeth II, who named him a Commander of the Order of the British Empire (CBE) in her recent annual Birthday Honours.

Having made his name creating prog rock extravaganzas, in his solo shows Wakeman returns to his roots with a programme packed with virtuosic piano performances and hilarious anecdotes inspired by his 50-plus-year career. Repertoire will range from his solo works and his stints in the band YES through to his early days as a session musician playing keyboards on such classics as David Bowie’s Life On Mars, plus surprises like his unique interpretations of Beatles’ hits and many more memorable tunes, adapted for the grand piano. And all of this glorious music is punctuated by riotous reflections on his life and the people he’s met along the way. As he himself often observes, life is rarely dull when Rick Wakeman is around!