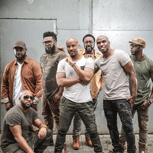 7 guys. Multiple ways of making music using only their voices. What they do is far more than a-cappella. They are a band without a band. Having met in school and gospel choir they quickly discovered that they were doing more than just singing songs, they all discovered perfect hypervocal capabilities.

Nowadays they have famous fans such as Michael Bublé (whom they joined on 3 world tours), Coldpay (“Fix you” is one of the finest adaptions of music you can imagine), Quincy Jones (who called them “best a-cappella band worldwide”), Herbie Hancock (listen to their H. Hancock medley) and many others.

Their repertoire is a mix of their own compositions and cover versions.

This year they are celebrating their 20th anniversary which will be acompanied by new releases and remixes of famous hits (such as “Wall of Sound”). They happily participated in CBS’ new TV format “World’s Best” that aired from February to April 2019.