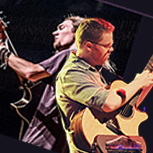 Mike Dawes is hailed as one of the world’s finest and most creative modern fingerstyle guitar performers.

His acclaimed solo music has gained over 80 million hits on popular video sharing sites and since the release of his debut album in 2013 he has toured almost every continent on the planet, with an average of 150 concerts per year. Mike was named ‘Best Acoustic Guitarist in the World Right Now’ in both 2017 & 2018 by Total Guitar Magazine/MusicRadar. His show is not just for guitar fans however, his entertaining and humorous rapport transcends the traditional guitar concert. Extraordinary virtuosity meets Monty Python via a one-man rock show.

Mike has recorded with and taught multiple grammy-winning artists, appeared on film and TV soundtracks, released apps, written for the world’s best-selling music magazines and in addition to his solo work, currently performs alongside and in support of the legendary frontman of The Moody Blues, Justin Hayward, the debut live DVD of which entered the US Billboard charts at #2. Musicians including John Petrucci, Steve Vai, Gotye, Billy Sheehan and James Valentine (Maroon 5) have all spoken of their admiration towards Mike’s work.

Rated one of the top 30 guitarists in the world under 30 years of age by Acoustic Guitar magazine, Trevor Gordon Hall is an instrumentalist from Philadelphia whose compositions range in style from edgy driving rhythms to soft melodic phrases. Trevor sets himself apart by leaving no physical aspect of the guitar untouched and weaving together different textures into grand yet intimate and lyrical compositions.

Trevor continues to tour playing his custom-designed “Kalimbatar” for audiences all over North America, UK, Europe, and soon Asia and South America, including a recent debut at the iconic Carnegie Hall in NYC. With high praise from industry greats including Steve Hackett, Graham Nash, Pat Martino, Tommy Emmanuel and more, Trevor continues to develop his blend of sounds that focus on utilizing the instrument’s fullest creative and compositional potential, guiding listeners through an igniting experience of music that isn’t just heard but felt.