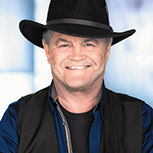 Share the stories and songs of one of the greatest voices of a generation. Hear Micky sing hit songs like “I’m a Believer”, “Last Train to Clarksville”, “I’m Not Your Steppin’ Stone”, “Daydream Believer” and “Pleasant Valley Sunday”.

Micky first established himself as a performer at age ten when, under the stage name of “Mickey Braddock,” he starred in his own first TV series, Circus Boy, which aired on NBC and then ABC from 1956 to 1958. In his early teens, Micky guest-starred on a number of television shows. As he graduated high school and began attending college in the mid-‘60s, Dolenz also learned to play guitar. He soon began to perform with a number of rock ’n roll bands, including one called The Missing Links.

In the fall of 1965, Micky was one of 400 applicants who responded to a trade ad that announced auditions for a new TV show about a rock band. He auditioned for The Monkees’ TV show by playing and singing Chuck Berry’s legendary rocker “Johnny B. Goode,” and wound up chosen for the show along with three other actors: Davy Jones, Michael Nesmith, and Peter Tork.

Actor, singer, director, producer, writer, radio DJ, inventor, and all-around performer extraordinaire, Micky Dolenz stands tall as a paragon of taste and accomplishment in the rough-and-tumble world of show business and entertainment. And oh, by the way – he remains a believer . . .