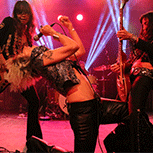 Founded in 2004 by New York guitarist, Steph Paynes, the all-girl quartet, LEZ ZEPPELIN,has since gained unanimous critical acclaim as one of the most exciting live acts around, becoming the first female rock act to pay homage to Led Zeppelin and to garner rave reviews across the board. LEZ ZEPPELIN stays true to the musically audacious spirit of the original, delivering the legendary rock band’s blistering arrangements and monstrous sound note-for-note at sold-out frenzied shows around the world. In June, 2013, Jimmy Page attended their show in London

The thing that sets LEZ ZEPPELIN apart is the seamless and unique way they inject their gender-bending performance into the original material. They have been featured on major television including the BBC, CNN, ABC, CBS,MTV, VH-1, FOX and radio worldwide.