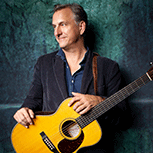 Ellis Paul is one of those gifted singer/songwriters. Though some may refer to him as a folk singer, he is more, for lack of a better word, a singular storyteller, a musician whose words reach out from inside and yet also express the feelings, thoughts and sensibilities that most people can relate to in one way or another, regardless of age or upbringing. The exhilaration of the open road. A celebration of heroes. The hope for redemption. Descriptions of those things that are both near and dear. The sharing of love…, intimate, passionate and enduring.

Joni Mitchell, Bob Dylan, and James Taylor are also listed among his influences, and their spirits seem to occasionally grace his work. With an acoustic guitar in hand, he weaves intimate, provocative, and romantic tales of lives that were obviously witnessed by a most-talented voyeur.

Ellis Paul’s 20th album, The Storyteller’s Suitcase (May 2019), is the first that he produced himself and is the first on his Rosella label. The album contains 13 tracks and includes a 30-page booklet with drawings, lyrics and back stories for each song

Laurie MacAllister held a quiet dream of being a singer since she was a very young girl. Her voice finally came alive years later when, on a dare, she was convinced to sing spontaneously for a crowd in New York City, in Washington Square Park. A career began in that moment. In 2004, at a campsite at the Falcon Ridge Folk Festival, Laurie began making music with her campmates, weaving their voices together in harmony. In an impromptu and magical moment, the Americana trio Red Molly was born. With a focus on beautiful songs, soaring harmonies, and a deep relationship with their fans (who dubbed themselves RedHeads), the band quickly became the darlings of the folk/Americana scene. Red Molly has shared their voices around the world for seventeen years, singing everywhere from Australia to America, playing 100 shows annually in front of thousands of fans, frequently selling out venues, and releasing seven acclaimed albums. Along the way, in 2010, Laurie’s voice was featured in a national television commercial for Folgers Coffee.

In 2018, she produced and released a new solo album called “The Lies the Poets Tell”, a collection of some her most beloved songs. The album features duets with six male vocalists, including the late Americana master Jimmy LaFave. Laurie has composed and sung harmony parts on dozens of recordings, including those by Cliff Eberhardt, Susan Werner, and Ellis Paul. She’s also taught singing and stage performance around the country, including at Folk Alliance International, Targhee Music Camp, and the New England Songwriters Retreat. Laurie’s powerful yet delicate voice stretches octaves, warm and romantic one moment, playful and irreverent the next. One song at a time, one show at a time, over the course of two adventuresome decades, Laurie has turned her quiet dream into a joyous reality.