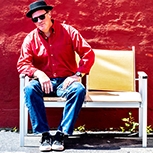 Join local Natick musician Dan Weddle for his first solo record release “Out & About”. Multi-talented singer songwriter, guitarist and drummer, Dan has been performing solo and playing in several bands in the region since the mid-80’s.

His songs are influenced by generations of power pop, Americana, punk, and singer-songwriter icons, weaving melodies and hooks that are supported by strong back beats. Relationships, humor, despair, and whatever is currently bugging him are the inspirations for the lyrics and vibe of the songs, with arrangements both traditional and not – songs will move from one groove to another. Tracked in Watertown (with Eric Salt), Framingham (with Bill Doucette), and Somerville (at Q Division), with contributions from several local musician heavies in the original music scene, “Out & About” was Engineered by Matt Tahaney and Co-produced by Ed Valauskas at Q Division, and Mastered by winner of 13 Emmy awards, Jim Chapdelaine.

In the late 80’s, Dan started a small demo studio called Spectrum Sound in Everett with long-time friend and current band-mate in Stuck Stars, Neil Meehan. Honing his Boston-area bar-band skills in the late 80’s and early 90’s with Barking Brains & Cactus Gallery, Dan moved to Philly area for a 5-year stint, but came back to his hometown of Boston for more of what he started. Drumming for Cheaterpint, he and his bandmates tore through Boston to end up in the 2008 WBCN Rumble. Drumming, singing, writing and playing guitar for Spinoff, he found an opportunity to thread humor throughout his songs, which is heard on some tracks on “Out & About”. His recent discovery of the world of Kindie bands has opened up a world of putting smiles on the faces of families who come to see him drumming for Karen K. and the Jitterbugs (as “Stinky” the Stink Bug) and The Stacey Peasley Band. Dan is also currently drumming and contributing to Stuck Stars, and working on other original projects.

Eric Salt is a Boston-based songwriter known for his jangly, eclectic rock sound and memorable, well-crafted tunes. Salt has been a respected staple in the Boston rock scene since he helped found the legendary Abbey Lounge music scene in 1997. His debut LP “The Hail Mary,” was met with high praise, and “Please Say Yes,” his sophomore album , and a playful nod to one of his biggest influences, Billy Squier (“Don’t Say No”), helped earn him a place in the acclaimed 2016 Boston Rock & Roll Rumble in which he was a semi-finalist. Salt is a member of Jenny Dee and the Deelinquents. Another force in the Boston music scene. He also plays solo shows regularly, covering his own songs acoustically and drawing from a crowd-pleasing rock to roots songbook that music lovers admire and enjoy. He has performed onstage with such artists as Ronnie Spector; Glen Hansard; John Wesley Harding, in venues large and small including Fenway Park and Boston’s Symphony Hall.