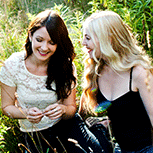 DALA features vocal harmonies guaranteed to give you chills. Juno nominees and winners of the 2010 Canadian Folk Music Award for Vocal Group of the Year, Amanda Walther and Sheila Carabine of Dala write and sing in harmony best described as angelic. The duo also make use of their considerable talents on guitar and piano to create a unique brand of acoustic pop. Their fun and energetic stage presence has made DALA a fan favorite at festivals across the country.

Drawing upon influences like The Beatles, Joni Mitchell, Neil Young and Bob Dylan, Dala write songs that are both catchy and insightful. Amanda’s ethereal soprano voice blends seamlessly with Sheila’s velvety alto, creating the lush harmonies that have become their trademark.