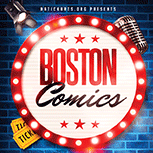 Mark Scalia has been a comedy favorite with audiences for over 30 years.  From comedy clubs to Comedy Central, cable programs to hosting live events, he has entertained tens of thousands of people across the US and Canada. His material is funny, insightful and personable. He is able to craft his sets to include all ages. Mark has performed in many comedy festivals including Boston, Seattle, and New Orleans. He is the proud founder and host of the Salem Comedy & Spirits Festival, an annual event that brings a variety of talented comedians from across the US to historic Salem, MA.

Joe Espi started on the Boston comedy scene in 2006. His self deprecating style along with his heavy sarcasm has made him a local favorite. Audiences enjoy how he jabs at his childhood, dysfunctional family, and disastrous dates. People seem to relate to his blue-collar humor and his ability to be the punch-line of a joke.

Alex Giampapa began performing stand-up comedy in Boston at the age of 19 and soon became a popular act all across New England. His edgy, but relatable style has made him a popular choice for many different types of audiences: “His voice and onstage demeanor may be soothing, but that doesn’t mean the Actual News host won’t bring a scorching set of well-crafted jokes, hot takes on current events, and a good, healthy dose of social commentary” said Vanyaland.