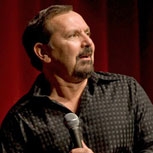 Paul Murphy spent almost eleven years as an Assistant District Attorney, supervising several of Massachusetts’s busiest courthouses, before building a reputation as a noted criminal-defense trial attorney. The unexpected twist to this story is that, for nine of those years, under the pseudonym of Paul D’Angelo, Paul was simultaneously becoming one of the nation’s top standup comedians.

Paul recently co-starred in Showtime’s popular stand-up comedy movie, ‘The Godfathers of Comedy’, and has also released two DVDs and three critically acclaimed comedy CDs that are played regularly on national radio. In addition, Paul is the writer/director/co-star of the original sitcom pilot ‘A Fine Mess’ which was featured at the prestigious New York International Independent Film Festival.

Mitch Stinson is a former aircraft-carrier aviator for the United States Navy who, as a pilot, made over 200 carrier landings during his 10-year military career. Mitch has recently risen through the comedy ranks in the Northeast US by virtue of his original material that offers unique insight into the transition from hot-shot Navy pilot to everyday civilian life… resonating with comedy crowds everywhere.

Billerica’s Scott MacNeil has come a long way since his first standup comedy routine at Giggles Comedy Club in Saugus. He started doing standup in 2009 when a chance meeting with Tony V (a frequent performer at TCAN) led to a phone call that got MacNeil on stage that first night at Giggles. Nine years later, Scott can say he has opened for Gilbert Gottfried.