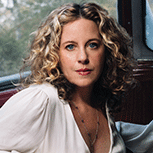 Singer-songwriter and multi-instrumentalist Amy Helm’s third album, What the Flood Leaves Behind, is her most autobiographical yet, both in content and creation. Due out June 18th via Renew Records/BMG, these 10 songs represent a gathering of ideas and experiences, friends and collaborators. Yet, the album also marks a landing — a pause for the traveling musician and mother of two young boys who was seeking clarity in her calling and career.

After making multiple albums and performing in far-flung places, Helm returned home to Woodstock’s Levon Helm Studios just before the pandemic to record What the Flood Leaves Behind and reclaim a sense of self.

Amy Helm’s silken voice weaves together her third solo album, What the Flood Leaves Behind. The lyrics reflect pain, truth, and beauty and asks questions that don’t always have an answer. Recorded at Helm Studios in Woodstock, NY, What the Flood Leaves Behind is a shining example of Amy’s spirit of collaboration. The ensemble cast of renowned musicians and producer Josh Kaufman (Taylor Swift’s Folklore, Bob Weir, Bonny Light Horseman) position Amy Helm’s powerful, emotive vocals to the album’s forefront. Each track takes the listener on a soulful journey to finding their own truth while resting in a protected, peaceful state of bliss within Amy’s musicality.

Born into music as the daughter of The Band’s drummer/singer Levon Helm and singer-songwriter Libby Titus, Amy Helm was raised between Woodstock, NY, NYC and Los Angeles. She is a founding member of folk group Ollabelle and a longtime member of The Midnight Ramble Band. What the Flood Leaves Behind is her third solo album.